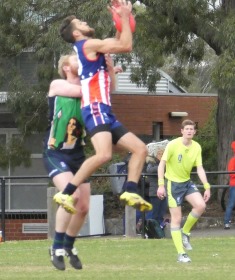 Playoff for positions 3 & 4.
The men’s division has been a tight affair with one of the grand final place being decided by percentage.  It could easily have been these two teams in the big dance. A marking infringement saw New Zealand kick a goal after the siren for them to qualify for the Grand Final and in doing so PNG moved into the Grand Final on percentage and eliminated Ireland. So close.
Both the U.S.A. Revolultion and the Ireland Warriors play a similar style of football and have the same profile of players. This contest on paper was impossible to pick a winner. The Warriors had the experience of previous International Cup appearances as well as European Cup appearances.  Many of the Revolution players lacked international contests but their tall team had garnered impressive wins except for against PNG.
Ireland was probably favourite going into this game. They had defeated the PNG Mosquitos in round one and had only lost to New Zealand with the final kick of the day in round four. The U.S.A. has had a slightly easier run with the draw but was beaten comprehensively by the Mosquitos in round three.  Overall  the Revos have seen another big improvement in standard. They’ve improved over and above other teams that have also improved. But the Warriors' team always consist of a totally competitive unit.
The first quarter commenced with a strong wind blowing across the ground. As both teams were pumped for a win it was a close affair. Michael Finn #9 was marking and providing drive around the ground and it was him that led, marked and kicked wide for Declan Nannery #14 to gather and snap true for the only goal of the quarter to Ireland. #26 for Ireland  was also providing drive for Ireland.Tim Lindfelt #33 missed a good opportunity after a good buildup by the Revolution.
1st qtr.
Ireland 1.7
USA 0.2
The second was another good effort by the Revolution to maintain the margin to a 5 point deficit. The rain came down at the break and threatened to make the Revolution’s job that much harder but it  quickly cleared to have no effect.Ben Carpenter-Nwanyanwu #4 was held after he kicked and goaled from the resulting free kick. U.S.A had the lead and were threatening. However shortly after Gavin Murray #11  marked on the arc and kicked a very good distance goal to the Irish. Declan Nannery #14 was providing options around the ground. The U.S.A. bounced back with a sliding mark and goal to Michael Linehan #22 after much discussion between the umpires. In reply William  Gleeson #31 gathered and goaled for the Warriors.
2nd qtr.
Ireland 3.2
USA 2.3

The third quarter is known as the the “premiership” quarter and this was certainly true today. The Americans were held to a solitary point. Ronan Cull #31 started with another goal from a snap close in.Donald Lee  #55 was doing well in the and even better around the ground.Christy Devaney  #34 burst out of the centre for a short pass to Declan Nannery #14 who marked and goaled. Gavin Murray #11 took an uncontested mark after a quick passage of play to mark and goal. The U.S.A. were playing well but Ireland were hurting them on the rebound breaks.
3rd qtr.
Ireland 6.3
USA 2.4
For the Revolution Donald Lee  #55 was contesting well in the ruck against Paul O’Halloran #18 and in the last quarter lifted tremendously taking many marks around the ground as well as in the packs. Declan Nannery #14 also lifted for Ireland. It was a very even quarter but that was not what the U.S.A. wanted. Bryan Dragus#18 marked on the wing to pass to Declan Nannery #14 on the arc for a goal and a solid finish for Ireland.
Final
Ireland 7.6 (39)
USA 2.4 (16) 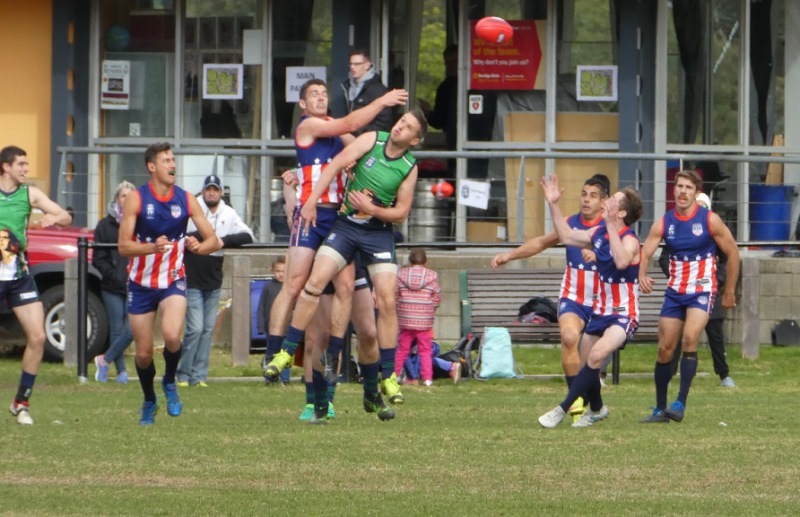 It was a thoroughly deserved 23 point win for the Irish Warriors who were in control for most of the game.  Some small solace for missing out on the Grand Final.
Editor:  Also noted was the apparent absence of Padraig Lucey, one of Ireland's stand out players this tournament.  We suspect with Ireland out of the final he returned to Sydney for club football (unconfirmed but worth noting given his dominance in this tournament and a sign of Ireland's strength that they won comfortably without him).