IC17 Gala Night - love it to the moon and back 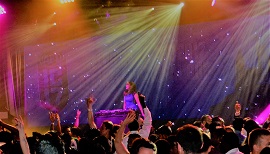 The fabulous Finals final Friday is one of the best days of IC footy - evenly matched teams playing for rankings - but there is also slowly building atmosphere is levity as the games reach their conclusions - the last on field gatherings - hugging opponents and in many cases IC friends that there is no guarantee will be seen in 3 years time. That mood bubbles over a few hours later - as the evening lights up at the AFL International Cup Gala night at the Palladium Room at Crown.

For many participating players - such an evening is a million miles from their normal. It's still largely invisible in the AFL world. The Adelaide Crows were hosting the Sydney Swans - meanwhile few in attendance at Crown were perusing their phones to check on scores - there's too much going on. There was irony the following Monday - when, senior AFL Executive (and currently footy ops fill in) Andrew Dillon was quizzed on SEN radio about happenings at Adelaide Oval on the Friday night - he didn't admit that he was at the IC17 Gala night. 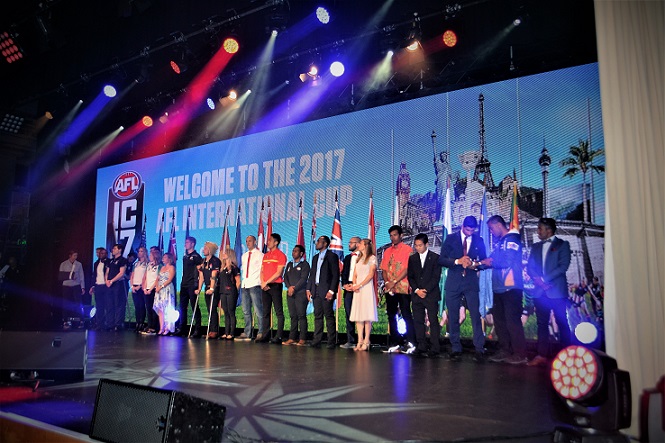 This years edition of one or the AFL's most unique events - in the Australian domain of footy - was again heralded in with the entrance to the room of the captains bearing their national flags. This imagery is consistent with the twisted tales narrative of the preceding fortnight. For regular followers of the game there was the opportunity to see and hear 'our' game in a different and unfamiliar way. First and foremost - we generally only hear the Australian national anthem - at finals - and the Irish anthem for those hybrid International Rules matches. Pre game war dances have never been associated with the world of AFL and yet those of us who have followed the international game know full well which games to get to in time to have cameras at the ready and to experience these cultural glimpses from a few paces away rather than from the grandstands at perhaps an international Rugby match.

The cultural diversity of the participating teams provides a whole variety of languages and appearance and demeanour. There's no 'sameness' - from squad to squad the differences are often stark. An observation from the schools hosting round 2 matches was that the Indonesia vs Croatia match appeared like boys against men. The glory of 3 ovals running games back to back all day at Royal Park is a trove of footy exploits - in which each side is a national flag bearer. Each player is living an Australian footballing privilege (not often available to Australians themselves) - representing their nation. As one of the French side commented - his on field highlight was his first experience of singing the national anthem. So - no matter the mismatch - the effort is sustained - the pride is real. The skills - well, some squads 'bat deeper' than others. The team balance - again - some squads have the typically right sizes in the right spots. It can be a cliché to refer to a rich tapestry - but that is what it is.

The richness of this 'tapestry' is most apparent when all are assembled in the one room - at the one time - at the Gala evening. That backdrop of national flags sets a scene - however - rather than a singular focus on the main stage - the glory of the night would be missed were that the assembled diners be ignored - and that is where the eye is so often drawn to take in all that is great about the tournament. The players and support personnel of - in this years instalment - 26 teams representing specifically 17 nations (although of course the Great Britain sides can be broken down further as well as the European Crusaders women's squad) ; some have been here before, some may never be here again. For some - as suggested by a gnarly veteran of 5 tournaments - for some, coming here could be equated as momentous a journey as for other folk would be going to the moon. 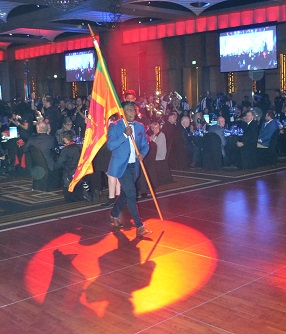 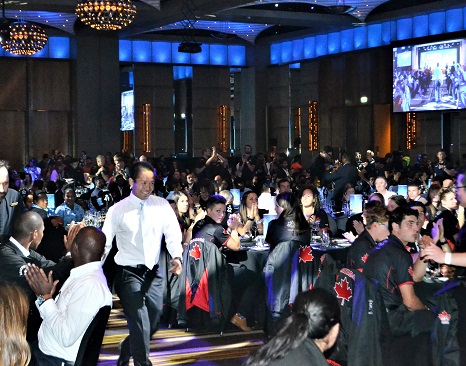 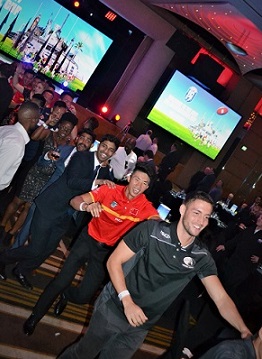 The official proceedings for the evening shine a light on some of the best performed individuals. Sure - there are 2 Grand Finals still to be played - and there is a debate for another day as to whether the Gala evening should be held over for an extra day. The announcements of the players of the tournament for each division, top goal kickers and then the men's and women's world teams. Some names are well known - it's very hard to represent everyone. 34 year old IC veteran - Japanese Samurai Michito Sakaki has been here before - a veteran of all 6 tournaments and a previous member of the world team - he was announced the Div 2 player of the tournament and was selected forward pocket in the world team. At the other end of the scale - "Ace" - the PNG prodigy - Hewago Paul Oea, yet to turn 16 - was named on the bench. The following day he would produce a 'BoG' performance in the Div 1 Grand Final - his IC legend is just beginning and perhaps the footy world may yet be his oyster - but, for the IC17 Gala night, he'd be drinking water irrespective of having a GF the following day. The men's jumpers were awarded by Melbourne FC's Christian Salem, whilst the women's by AFLW Carlton star Darcy Vescio. And probably the biggest cheer of the night came when Pakistan's Myra Ahmed was announced on the bench in the women's team. One could try to analyse the moment - suffice to say the room stood, applauded and I suspect many an eye had a tear of joy and pride welling within. 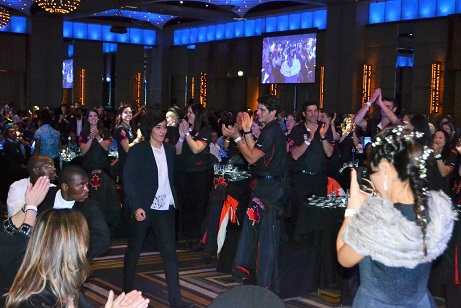 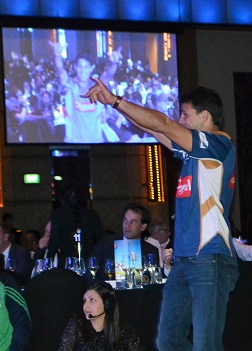 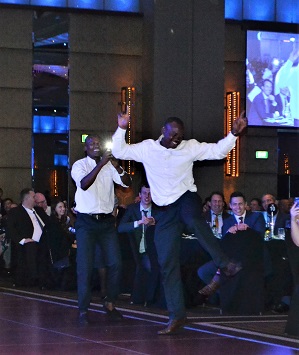 Matthew Richardson - former Richmond Great - provided some roving reporting from the floor - interviewing the next days GF captains. This was apt - the main stage feels a little too formal - the attention of the room is more naturally focussed back within. Soon it was over to the Fijian men to provide some dancefloor entertainment - being joined shortly by many within the room ringing the dance floor to capture the moment - and then being joined on the dancefloor by the room - as a DJ up on stage set the tone for the very literal letting of hair down - although the conga line earlier in the evening attested to the fact that there already had been at least a figurative letting down of hair.Walking around the room - the mingling, the comradery, the Samurais dancing with the Banshees, Shaoliang Chen with the broadest of smiles (this weekend having debuted for Port Adelaide Magpies reserves) and soaking up the night with his teammates, everywhere you looked there were broad smiles and no worries in the world - for one night at least.

And while the weather played some August tricks - Spring-like winds; cold wintry showers and then suddenly sunshine - well, really, it's Melbourne and it's a winter sport - as Saleh Tyebjee from the US Revolution put it - the most respected IC opponent was "The Cold"!!! There were different highlights for different squads across their time in Australia and around Melbourne in particular. Different schools playing host, and the community weekend ensured different experiences - but also the local hosting clubs and some of the one off visits such as the French to the Giants Centre. Even the launch back on August 5th was a highlight for many - the visit to Government House in itself was a highlight but so too the South African dancing. Around the on field action there was recovery and celebration. Ice baths and wading in freezing pools or the waters of the bay - recovery is as important a part of a 5 match tournament as anything. But celebration too - the German Eagles found time to make their way to the Munich Brauhaus to celebrate making the Div 2 Grand Final. 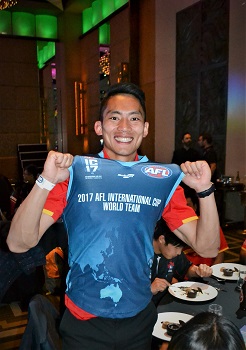 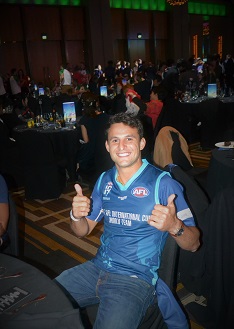 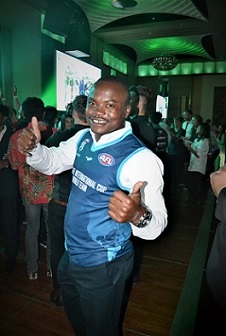 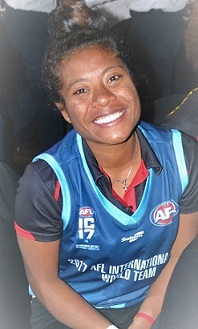 While not all sides can face each other - there are opponents and sides that draw respect. Whether it be the New Zealand or Ireland teams in general or the South African or Japan captains individually - there is respect and admiration across the divide. The biggest disappointment may depend on expectations or finishing - for the US Revolution, not making it to the MCG, for the Germans, losing the Div 2 GF, for the Fijians the 2 narrow losses to South Africa and Canada but - at the same time - even though they were soundly beaten by New Zealand - the encounter proved a highlight nonetheless. The Fiji Tribe now set their sights on going better in 2020. The Germans - even in going down could see the funny side - with the final siren seconds away - a handball from an Eagle to the Croatian captain just so he could be brought down in a tackle right at the end - huge smiles all round as the siren sounded. It's good to remember - it's just a game. 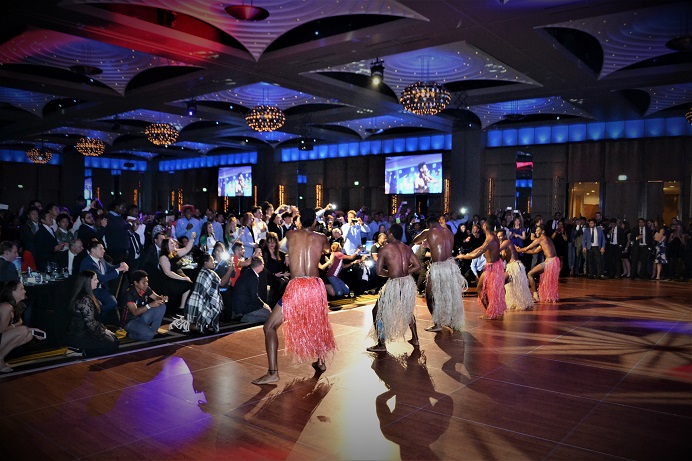 The final siren of the IC Grand Finals on the Saturday signalled the official end of the tournament. Some were heading straight back home, back to normal, whether that be a couple of hours away, or a day or two of connecting flights. Meanwhile there were those who would be in the position of making a bit more of their time here - off to Adelaide for a week, or to upgrade the hotel room and properly explore Melbourne, or off to New Zealand meeting up with the parents for a few weeks. Hopefully IC2020 will bring many back and many new visitors to Melbourne for another instalment - a further addition to the tapestry - we're all the richer for it. 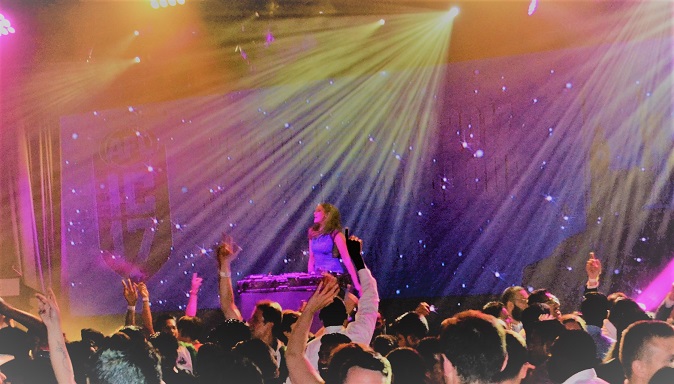