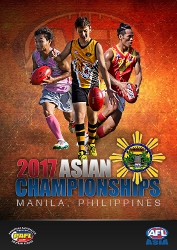 The Philippines capital city of Manila played host to the 2017 AFL Asian Championship last weekend. Clubs representing nations from across the length and breadth of the Asian continent took part again in the AFL Asia showcase event, with the Warriors claiming the Division 1 title and the Bali Geckos making it back-to-back Division 2 titles.

After taking the 2016 title, and being the host nation for this year’s event, the Philippine Eagles entered the vent as mild favourites. However, the Malaysia Warriors would have none of it, winning their way through the round matches before downing the Eagles in the final and celebrating 25 years as a club in grand style.

For the Bali Geckos, their victory in Division 2 was as sweet as it gets, going back to back after winning last year in Ho Chi Minh City, Vietnam, when they downed the Myanmar Fighting Cocks. This year they held their nerve again to add another trophy to their football cabinet.

This year the Division 1 teams were the Warriors and Eagles along with the Hong Kong Dragons, Jakarta Bintangs and Singapore Wombats. The Division two teams featured the Geckos as well as the Macau Lightning, Vietnam Swans, Myanmar Fighting Cocks, Indonesia, Papua New Guinea, China as well as “B” teams from the Singapore Wombats, Malaysia Warriors and Hong Kong Dragons.

Details of matches are not yet available to publish. A full list of scores will follow once released by AFL Asia.