A Dingo Dream – The Sky’s The Limit 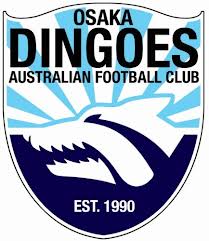 For a number of years the Osaka Dingoes in Japan were one of the mainstays of the national league in the country. For a good few years, the Dingoes were right up there with the Tokyo Goannas as the teams to beat. However, in a world of change, things didn’t stay the same, and the once mighty Dingoes fell on harder times as their club and the league around them looked at changing the footy landscape – for a number of reasons.

The end result saw the Osaka Dingoes stand on the edge of a precipice and look down into the void of footy oblivion. Part of Japanese footy history and nothing more.

But that didn’t happen, and Matt Gale, president of both AFL Asia and now of the Osaka Dingoes, tells the story of how close the club came to extinction and how they have found their way back. It hasn’t been an easy ride, and at times has been fractious, but the end result is one of confidence and potential.
Matt states that “The Osaka Dingoes played its last ‘official’ game in the 2013 AFL Japan Top League Grand Final, admirably going down against the Tokyo Bay Suns.”

“Within months of the Grand Final, AFL Japan is no uncertain terms told us that we’d no longer be in the Top League and that the Osaka Dingoes and the Nagoya Redbacks would need to start their own league in the West of Japan. At the end of 2013, we were also told that we needed to create new teams to play against otherwise it’d only be us and Nagoya in a ‘two team’ competition. ”

“I decided that the writing was on the wall. I was 35 years old, kicked 103 goals in nine games, including a Gary Ablett-style nine goals in a losing Grand Final and wanted to explore Japan with my wife and walked away from the game.”

“The Osaka Dingoes have been in a dormant period and barely played an exhibition game until about 15 months ago when I decided to resurrect the club, otherwise it would’ve been lost forever.”

“Over the past 15 months, I’ve been interviewed by SEN1116 about our situation. We’ve been able to get some footys from the AFL - about 35 Auskick footys through an SANFL contact of mine. We’ve delivered over a dozen Auskick Clinics within Japanese schools, successfully gained a new major sponsor in recent months, hosted an ANZAC Day tournament, which included the Japan Samurais, and more importantly reconnected and rekindled an effective and respectful working relationship with AFL Japan.”

“In the upcoming months the Osaka Dingoes will be officially welcomed back into the AFL Japan circles in a playing capacity within a structured footy competition. It’s a remarkable turnaround, that was also assisted by my roles within AFL Asia. Throughout the 2017 season, I was the AFL Asia Coaching & Umpiring Development Coordinator and was recently elected as the AFL Asia President for the 2018 season. I’ve utilised my Osaka Dingoes and AFL Asia roles in a double-edge sword approach and in a patient manner to get us to this point and it’s finally come to fruition.”

It is a great story, one of dedication and determination, but also of an underdog prepared to get up off the canvass – to use the boxing vernacular – and once again dream of firstly being back on the field, then finals and then the ultimate dream – another club premiership. Some of those things might be a little way off yet, but the Osaka Dingoes are back and with Matt and his team driving them, the sky really has to be the limit.