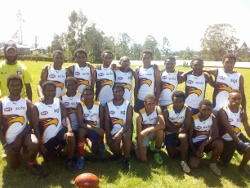 In a rare opportunity to chat with a club president of a club from New Guinea, a fascinating account of growth and regrowth emerges. In the process, West Eagles boss, Alois Melua, gives us a small window into how a club operates in the shadow of other stronger codes in Port Moresby.

Alois started playing Australian Rules football in 2010. He played for several clubs in Port Moresby, starting with the Uni Tigers -the club managed by his late cousin and key figure in local PNG footy, Peter Meli. In 2017, Alois was with the Koboni club and joined the Eagles in 2018.

The club’s past shows a journey with highs and lows. “The West Eagles club started way back in the late 80s and has been one of the prominent clubs in history of AFL in Port Moresby and around the country as well. The club had won several grand ﬁnals in the Port Moresby AFL competition and also produce many talented and skilful players who have represented the country playing for PNG Mosquitos Team.”

We started [again] from scratch after seven years of absence from the AFL scene. We had to recruit new players and train them to capture the skills to be able to play the game as we wished. It was a rough and tough time trying to put the puzzles back together.”

“We recruited most of the young players in West Eagles club [for] 2018.  Through dedication and commitment of the management team we reaped what we sowed. [In] 2018 West Eagles Club is back to where it is before.”

“West Eagles is doing really well in developing the players. [We have] got some good talented players who can run [and control the play]. Playing against other clubs like the Bomana Cats, Central Bomas and Uni Tigers, it is always an easy win for West Eagles because they are not really competitive. Lamana Dockers and Koboni [are the teams] where you can really see players are on their toes and going hard for the ball and playing [hard] footy.”

Alois was candid about how he saw the game in Papua New Guinea on a wider scale. “In Port Moresby, AFL is not really organized and managed as well as other codes. We have some good talented players who play for the clubs in Port Moresby but because of [management deficiencies in] AFL in Port Moresby, some players see that there’s no future of playing AFL so they switch codes.”

“We do have couple of good AFL experienced people in the club. Some of them have represented the country in international championships and clubs championships too. I’m just a new kid on the block and I’m really trying to do the best for the players for their future.”

“We have some good talented players in the club who represented the country in international championships for many years but still [Port Moresby] AFL is not recognizing them or doing something for their future. I’m bit worried because some of my players and PNG representatives are now switching codes because they don’t see any future for AFL in Port Moresby. This year my dream is to work hard and get them to splay in some clubs in Cairns or other state in Australia.”

“The AFL competition in Port Moresby is not really as strong like other codes. It’s not getting any bigger. Many provinces in the country have no AFL competition.”

The evidence, however, paints a picture of support from AFL Queensland including development staff. This is also translating to big junior numbers across the nation joining programs and a rapidly growing women’s game.

According to the AFL Queensland website, the game in PNG is well run and growing. “AFLPNG Development are the AFL’s development arm in Papua New Guinea, with 20 full-time staff and a strong focus on development and talent.

The AFLPNG Development “Paradise Foods Niukick” program is the flagship introductory program to the sport of AFL used across PNG, teaching the basic skills of our game, as well as developing good behaviours around health, disability inclusion and gender-based violence.

With a direct link to the AFLQ Talent pathway you will also see the PNG U/14 Binatang boys & U/17 Kurakum girls competing in the AFL QLD Youth Academy Championships each year.

The world beating national men’s Mozzies and women’s Flames teams are continually at the pointy end the International Cup every three years with the Mozzies winning the past two competitions.”

The nation has produced players who have gone on to AFL lists with Mal Michael the most celebrated after his career at Collingwood, Brisbane Lions and Essendon. Gideon Simon was on Richmond’s rookie list for a time and Brendan Beno was signed to the Brisbane Lions academy. David Meli was rookie drafted by Essendon. There have been and will be others.

Alois sees pathways to the big time as the lure for both his West Eagles players and any others who want to pursue the game at a higher level – even via the strong AFL Cairns competition which is the closest.

“I think that it would be a great opportunity for the players in PNG to come and play in the Cairns competition. It will fulfil my dreams of getting my players to play in Cairns too.”

The game of Australian football was first played back in 1944 when Australian servicemen introduced the game to the nation. Since then the game has had ups and downs. The nation has been a dominating force at international level with their Mosquitoes team winning the 2017 International Cup in Melbourne. They have won that title three times since 2002 and never missed a grand final. They also backed it up with the Asian Champs title in Kuala Lumpar last year.

The talent coming out of PNG is frightening. But, perhaps his view is restricted purely to a local club level, which is always a different prospect to the wider picture. Maybe his West Eagles are part of that drive to take the game in PNG back to its former lofty (by current comparison) heights.

*This article expresses the view of the interviewee and does not reflect the opinions of World Footy News.