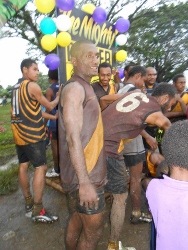 Club founder, Elliott Takolu, is proud of his footy team. The Salamander Power club is based in Lae, north of the Papua New Guinea capital city of Port Moresby, and operates within its own small league – AFL Lae - well out of the glare of the rest of the football world.

Whilst it is known to some that footy is played as far and wide as Iceland, Chile, Myanmar, Uganda and many other exotic, far flung nations, this club which is close to Australia’s doorstep is almost anonymous.


Their player pool came from Rugby, Rugby League, soccer or no backgrounds at all. To many it was a new game and required a great deal of learning.

“In our first year of senior footy we managed to make it into the grand final in AFL Lae competition out of six teams but we lost because most of our players were under 18 boys and we were inexperienced playing grand final footy.”

“In 2013 we bounced back and got our boys enough experience through junior development, representative duties playing plus some senior boys behind them taking hits and [providing] motivation to lead by example on and off the field. We managed to get our first premiership.”

“To combine premiership coaching and playing as well as managing the team could not be achieved without the help of some parents and dedication of senior players taking up responsibilities helping out with our junior development and representative duties.”

“Most importantly, our brother club donations. We had and still have no major sponsor. All equipment and jumpers have come from donations, so in this year I'm looking at getting sponsorship for us.”

“We remember the Baulkham Hills Hawks jumpers we received from them a few years ago. We are donating them this week to our new team, the Hawks Brothers senior club to help them take part this season in AFL Lae senior competition.”
“In appreciation for my senior team and their efforts, I'm planning to get us to play in the Governor’s Cup in September in Kimbe.”

“Last year I came up with an idea for us to raise some money so we hosted an annual event for the club called the ‘Power 9s’ comp every October. We saw four men’s team and only two women’s team took part but that is a good start and we hope to see an increase in teams this year.”

It is difficult for clubs in stronger leagues around the world to find the resources (financial, equipment, personnel) to run a club. It must be even harder for clubs that are not on the world radar. Yet, the Salamander Power keep going and keep growing through the passionate efforts of Elliott and his loyal team.

If clubs are interested in helping out the Salamander Power, contact World Footy News and we can happily get you in touch with Elliott and the club.