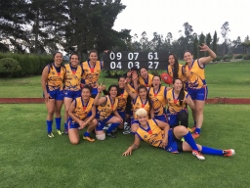 The following article from Tristan Quigley appeared in The Bogota Post back in May this year and detailed the performance of the Bogota Bulldogs’ history making performance in their very first international match.

Women’s Australian Rules Football took a huge leap forward internationally over the weekend, as the Bogota Bulldogs hosted the USAFLW & AFLW Europe combined team, cruising to a 34-point victory (9.7.61 to 4.3.27) in their first ever intercontinental match. The 9’s match took place in at Los Pinos Polo Club on the outskirts of the Colombian capital and was the first ever international women’s match in the Americas.

The match was a huge step in the development of Australian Rules football in Colombia, the women’s team having only been founded in February this year and already boasting a membership of 22 players, all but one of whom are Colombian nationals. The women’s team was set up in conjunction with the Colombian charity organisation Buen Punto, which provides weekly Australian Football training to children under state care in the capital, as well as promoting surfing in Chocó, one of the most impoverished regions of the country. The men’s team has been in existence since 2015 and has competed internationally against teams from Austin, Denver and Santiago de Chile.

The match itself was a tightly contested affair for the first three quarters, with the Bulldogs’ Jennyfer Suárez and Alejandra Vega combining for the first four goals of the game, only to be pegged back in the second term by the visitors, through goals from Zoe Do, Makenzie Carr and Rae Hale. After a tense, goalless third quarter, the hosts ran over the top of their American and German opponents, with Suárez and Vega booting another four goals between the two of them. Daniela Ceballos provided the final touches on the victory, roosting a 25-metre goal on the siren to the delight of onlookers.

The game was officiated by American Laurie Rupe, who umpires in Minnesota. “I feel honoured to have umpired the first ever international women’s match in South America”, she said. “Their [the Bogota Bulldogs’] marking and kicking abilities will clearly be strengths that they can build on as they continue to progress”. Rupe has been involved with women’s Australian Football since 2014 and has umpired now on four different continents, including in Australia.

Bogota Bulldogs women’s captain Karen Cifuentes said after the match, “I think this is a really important step for us. We’ve been able to put together a team in such a short time and with such quality. We were able to compete against very good and experienced players, evenly for most of the match and at certain times even better. There’s a lot of work to be done, but we’re on a good path.”

The Australian Embassy, which has been very supportive of Australian Rules in Colombia hosted an event on the Friday before the match to promote the participation of women in sport and human rights more generally. The event included the Australian Ambassador, the director of Cultural Affairs from the Colombian Foreign Ministry and the Minister for Women in the local government of Bogotá, in addition to female players from Colombia and the United States. The panelists reflected on the challenges women face in traditionally male-dominated areas like sports, and the importance of supporting female participation in sport in terms of breaking down barriers and stereotypes.

Club president Alex Rafalowicz said about the match, “It’s amazing to look out onto the field and not see one Australian playing what is known as our national game. Women from the US, from Colombia, and one from Germany showing that sport is for everyone. That’s why we love Australian Rules Footy – it’s for everyone.”

The original story in The Bogota Post can be found at: https://thebogotapost.com/womens-bogota-bulldogs-win-first-international-afl-game/38336/[*1]