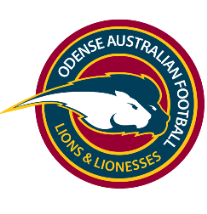 For a club that was born in 2013, the Odense Lions have done remarkably well. Whilst they received the requisite hidings in their early days, the club was in raptures back in 2016 when they reached the DAFL finals for the first time. Just to make sure it wasn’t a fluke, they returned to finals action in 2017 as well.

In both campaigns, the club was unceremoniously dumped in their only finals outing. Their 2016 final against the Copenhagen Barracudas saw a 137-point whacking, and their exit at the hands of the Farum Cats in 2017 saw a 93-point deficit.

Sad ends to promising seasons, but it is no real surprise, in retrospect, that 2018 became a year of recalibration for the Lions. The club took the wooden spoon yet the stirrings of 2019’s efforts were there.

The club invested heavily in their future by setting up a permanent, professional base at Bolbro and set about the process of recruiting and developing their playing lists for the future.

Now, the Lions have set a new standard – reaching the 2019 DAFL Premier League Grand Final, to be played next weekend.

In a tough match against the Port Malmö Maulers in the semi-final, teams were separated by just four points (to the Maulers advantage) at the half-time break and scores were locked at the final change. A better conversion rate by the Lions (kicking 4 goals 1 behind to the Maulers 3 goals 4 behinds) was enough for the Lions to hold on to win and grab a Grand Final berth.

The Maulers will likely look back on the game as a genuine missed opportunity. Inaccuracy cost them dearly all day. In the end they had seven more scoring shots for the afternoon that the Lions. The final score, however, saw the Lions 11 3 69 down the Maulers 9 12 66.

The stage is now set for the league’s most successful club, the Farum Cats, to meet the league’s newest club, the Lions, in a Grand Final that speaks to the future – a new era as the Lions make it to the biggest game of the season.

Regardless of the result, the Lions have achieved great things in just seven seasons, and it could get greater yet.