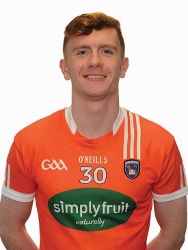 One of Essendon’s first off-season moves since being put out of the 2019 AFL Premiership race has been to secure another talented Irish footballer. The move to secure Ross McQuillan has been in motion for some time, but as the following story from the Essendon Football Club states, McQuillan has now been locked in.

Essendon will have a second Irishman donning the sash in 2020, following its signing of Ross McQuillan as an international rookie.

The new deal will see McQuillan join the red and black until at least the end of 2021, linking up with fellow countryman Conor McKenna.

Growing up playing Gaelic football for St Patrick’s in Northern Ireland, the 20-year-old will relocate to Australia to pursue his AFL career.

McQuillan’s impressive efforts in Gaelic football won him recognition as a forward in the 2018 EirGrid GAA Football U20 All Ireland team. The talented athlete also represented Northern Ireland in basketball.

McQuillan, who stands at 188cm, impressed recruiters at the AFL Europe Combine after he recorded the quickest time (2.77secs) in the 20m sprint.

As per the AFL International Rookie rules, an Irish player can be signed directly to a club’s rookie list and does not have to go through the draft.

“After extensive sessions with Ross, we believe he has what it takes to become a successful AFL player given his lateral movement, skills on both sides of his body and kicking ability,” Dodoro said.

“Ross ran an outstanding time of 2.77 seconds for his 20-metre sprint, which would make him the quickest player on our list.

“Most importantly, Ross displays the Essendon values through his drive and determination to succeed.

“We look forward to officially welcoming Ross into the club when he arrives in November.”

McQuillan is the third Irishman to sign with Essendon in history, joining current defender Conor McKenna and former player Michael Quinn, who played eight games for the club between 2009 and 2010.

McQuillan will relocate to Australia in October before commencing training with the full squad on Monday, November 25.

To read the original story from the Essendon Football Club website, go to: https://www.essendonfc.com.au/news/20...nal-rookie[*1]