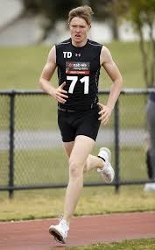 The Essendon Football club have taken their Irish commitment to its highest level, signing a third player for the 2020 season. On the back of the successful development of dashing half-back, Conor McKenna (fourth in the club’s best & fairest this year) and last month’s signing of Ross McQuillan.

McBride has the potential to become an important key position player at the Bombers at a time of transition for the club as they reshape their own forward structure. The following article comes from the www.essendonfc.com.au[*1] website.

Essendon has welcomed its third Irishman, with Cian McBride making the trip across the seas to don the sash in 2020.

The deal will see McBride call The Hangar home until at least the end of 2021.

McBride, 18, spent his junior years playing Gaelic football but made the switch to Australian Football at the beginning of this year, impressing at the NAB AFL Draft Combine and AFL Europe training sessions.

Standing at 197cm, McBride joins teammates Conor McKenna and Ross McQuillan as the third Irishman on Essendon’s list in 2020. He is the fourth Irishman to the join the club in history.

As per AFL international rookie rules, an Irish player can be signed directly to a club’s rookie list and does not have to go through to the draft.

“We are delighted to welcome Cian to the club as our second international rookie for season 2020,” Dodoro said.

“Cian has continued to impress us, showing great athleticism for his height, recording a six-minute and 17-second 2km time trial. He also recorded 2.99 seconds for his 20-metre sprint.

“He has adapted well to Australian Football, showing rapid improvement at the AFL Europe training sessions in June this year.

“We look forward to seeing what he can achieve in the red and black over the next two years.”

McBride will relocate to Australia before commencing training with the full squad on Monday, November 25.