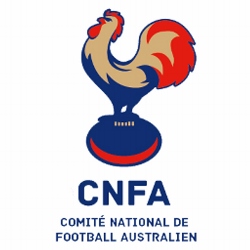 The onset of Storm Amélie across Europe, particularly parts of France, Spain and Italy, has affected the weekend’s CNFA matches. The storm saw the Bordeaux region hard hit with most sporting venues closed due to dangerous or waterlogged conditions.

The result of Amélie’s impact was the postponement of the match between the Bordeaux Bombers and Paris Cockatoos as well as the women’s north v south match (Nord v Sud du tournoi féminin) , raising funds for cancer. These matches will be rescheduled for later in the season.

The weather in Paris was significantly better, allowing the Antony Blues to host State Toulousain 2 in their second match as a fully-fledged CNFA team. Once again, the Blues showed a brave face and gave another a solid game. Nevertheless, Stade Toulousain proved far too good in the end, getting away to a 70-point victory.

It has been a tough start to the season for the leagues newest team, going down to the Cockerels and State Toulousain in consecutive home matches. Things may get tougher when the team travels to other venues, but already the Blues have shown themselves to be competitive and will continue to improve with more experience.

Pending weather conditions over the upcoming week, with Storm Amélie having moved on, the remaining matches for Round 2 will go ahead next weekend. In Lyon, the ALFA Lions will host the State Toulousain 1 team. The Bayonne Toreadors will welcome the Paris Cockerels to their home turf.

At this stage, there is no further word on the rescheduling of the Bombers v Cockatoos match, but word is expected as soon as possible.