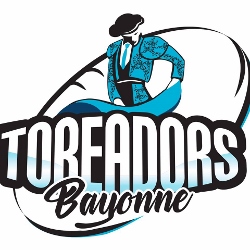 After just two completed rounds in the CNFA season, the Bayonne Toreadors are the surprise ladder leaders. Their upset victory against reigning premiers, the Paris Cockerels, has propelled the Toreadors to top spot early in just their second season in the competition.

In the other match, a massive win to the ALFA Lions sees them with a healthy percentage and sitting in second place.

Bayonne hosted the Cockerels in wet conditions. The club has acknowledged that their hard work last year and across the pre-season is paying off, and the evidence is there after downing both the Cockerels and Stade Toulousain. After a tight and tough affair, the Toreadors held on for a well-deserved 15-point win. This sets up a fascinating third round – the last before the winter break – where the Toreadors will host newcomers, the Antony Blues, and could well go to the break undefeated after three rounds and in a huge position to make an assault on finals football in their second season.
In Lyon, the ALFA Lions created their own club history, and rattled the record books for the CNFA, when they downed the Stade Toulousain Rouge team by 299 points. The Lions reached the fifty-goal mark (300 points) just before the final siren. Stade Toulousain were undermanned, it is true, yet little can take away the awe created by the Lions in dominating a game so comprehensively. Their percentage boost will be invaluable now across the season, but the message is also clear for other clubs – the Lions are back, baby!

In an unofficial, yet very important match on the weekend, two teams not playing in the Leo Lagrange Championnat this season locked horns in Lille, northern France. The Lille Eagles hosted the Cergy-Pontoise Coyotes in a special event. For the Eagles, it continued their learning curve on their way to playing big league in future. The Coyotes are in a brief hiatus, but their dominance in the game proved they have lost little despite playing less football.

It is heartening to the game in France boasting eight teams this season. The addition of the Coyotes and Eagles gives ten teams. But perhaps equally important is the Perpignan Tigers, also in hiatus mode, about to head over to Manchester to play in the 2019 Movember Cup later this month. It is exciting to see the Tigers still active in a big way in terms of the magnitude of the event and the opposition.