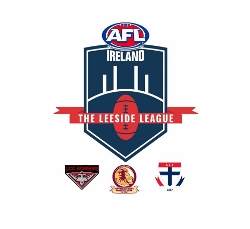 The inaugural AFL Ireland Leeside League competition was completed last week with the Leeside Lions pipping the CIT Saints on for and against to finish on top of the ladder. Results were not based on a finals series as such, but based on where each team finished after their six matches.

The Leeside Lions and CIT Saints (Cork Institute of Technology) finished the season with four wins apiece after the final round of matches. The Lions had the superior percentage.

“And that's a wrap on The Leeside League 2019. Phew, some going! The Leeside Lions powered home to claim the cup as inaugural winners, hearty congratulations lads. Hard luck to CIT Saints who were pipped at the end by score difference only, great showing boys.”

“Well done to UCC on their first win tonight, and for blooding plenty new talent throughout the league.”

“Congratulations to James O Shea on taking the Leading Goalkicker trophy, and to Oisin Fitzpatrick on being named the Leeside League's Best & Fairest.”

Certainly, the competition deserves the title of “the future of AFL in Cork”, but also speaks to a wider benefit as the future of AFL in Ireland, based on the chance for the feeder competitions to build the fortunes of the local club at national level. The Leeside Lions are likely to benefit greatly from the talent unearthed at local level in Cork. This could potentially lead to similar developments in Dublin, Belfast and Galway.

It is the first silverware for the Leeside Lions since winning the 2017 AFL (ARFLI) premiership.