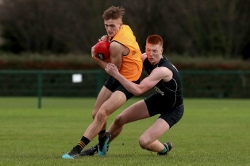 Marc McGowan from the www.afl.com.au[*1] website reports on another emerging Irish talent from last week’s AFL Europe Talent Combine in Dublin. It was also the first ever women’s combine and showcased some exceptional talent, with a number of women testing looking towards a potential career in the AFLW in coming seasons.

A LITHUANIAN-born footballer could be the next successful Irish AFL export.

The 19-year-old's parents emigrated to Ireland when he was four in search of better work opportunities, and he's played basketball, soccer and Gaelic football since.

Uosis is a goalkeeper in Gaelic football for his club and county sides – Dingle and Kerry, respectively – and his athleticism and skill caught recruiters' eye in testing.

Adelaide, Brisbane, Essendon, Geelong and Melbourne are all represented at the weekend Combine in Dublin, Ireland.

As was the case this year, the top four rated Irish prospects will be flown to Australia to train in front of interested clubs in April 2020 and another two will test at the 2020 NAB AFL Draft Combine.

Uosis led all comers with a slick 2.76sec time in the 20m sprint – including 0.92sec over the first 5m – and placed fourth in agility testing with a 7.92sec effort.

Both of those would have ranked No.1 at this year's NAB AFL Draft Combine, putting the 182cm athlete's outstanding results in perspective.

AFL talent ambassador Kevin Sheehan was "super" impressed with Uosis but said the athletic testing was "only one part of it".

"Today we have the game sense and match play (after testing the previous day), but they're elite athletes and as good as what we have in Australia," Sheehan told AFL.com.au from Dublin.

"You don't jump to conclusions based just on someone's speed time, but it does suit that they can break the lines and we are after fast athletes.

"It's inspiring to be in this environment. The kids want to give it their best, alongside like-minded guys from all over the country who have played against each other but never met.

"They're on a path that's quite uncertain but exciting."

It is the fifth straight year the AFL has held the European Combine in this format, with a record 17 Irishmen on AFL lists for the 2020 season – and another 18 in the AFLW competition.

Among the other top performers of the 20 men at this year's Combine were County Mayo pair Oisín Mullin and Matt Ruane.

Ruane is a star midfielder in Mayo's senior side and the Combine's oldest participant.

There were also some familiar names to recruiters, with Pierce Laverty and Jordan Morrissey attending again after being invited to Australia previously.

Laverty clocked a Combine-best 22.6 Yo-Yo result, well ahead of the score recorded by Collingwood recruit Jay Rantall, who won the Australian equivalent.

The 21-year-old also broke the three-second and eight-second barriers in the 20m sprint and agility tests, respectively.

Morrissey wasn't able to test this time around, because he is a key player in Éire Óg's Leinster final clash with the late Jim Stynes' former club Ballyboden-St Enda's on Sunday.

Ex-Magpie Marty Clarke oversees training for Irish prospects throughout the year, and Madden and gun Bomber Conor McKenna have also helped out in the AFL off-season.