Karishma Inspiring Women Through Footy And So Much More 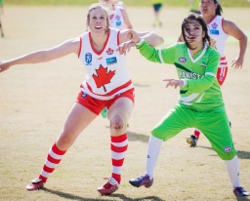 “Today many men in my area consider me a leader which is very rare for people in my area.  Many of the men who were against me once are now proud of me.”

And, in that passage alone, the inspiring story of Karishma Ali can be seen coming to life. This young woman graced Australian footy fields back in 2017 as part of the inaugural Pakistan Shaheens women’s team at the IC17 tournament in Melbourne. Since then, Karishma has not only been a driving force for the game back home in Pakistan – both for women and the game as a whole – and significantly become a world role model for women of all ages.

Since those days, Karishma has had her clothing paraded on the catwalks of Milan, met with British royalty and been a youth and women’s advocate within Pakistan envoys to China and the United States. This is heady stuff, and rather amazing for a young woman who was also named as one of the Forbes 30 Under 30 success stories.

(Karishma in action for the Pakistan Shaheens at IC17)

Yes, for all that, Karishma is as humble and gracious as they come. She will also be back playing footy on the Sunshine Coast next year for IC20.

So, an interview with Karishma was needed to try and get to the bottom of who this young woman is and why she stands as a role model to women everywhere.

“My name is Karishma Ali. I live in the north of Pakistan [near the Hindu Kush Mountains and close to the Afghanistan border]. The name of my hometown is Chitral. My village is located 3500 meters above sea level.”

“I was born and grew up in Chitral but then moved for middle school to Islamabad.”

“I am a footballer [in Australia, a Soccer player]. Growing up in Chitral as a child, I was never fine with the fact that boys and girls were treated differently. For example, I wanted to play football but it was not acceptable for girls to play football.”

‘I am the founder of Chitral Women’s Sports Club, where we work to provide a safe environment to young girls in my hometown to engage in sporting activities. We have 100 girls playing football and 45 playing volleyball.”

“I also run a handicraft centre for women with the objective of empowering them economically and socially.”

“The moment I was selected to be a part of the football team that was taking part in the international jubilee games, that was very special for me and of course being featured in the Forbes Asia 30under30.”

When asked how she managed to find her way into the world of Australian football, Karishma sated that, “I got to learn about [Australian] footy through my football club. Our manager had heard about a team being formed to participate in the International Cup, IC17. There were trials being held so I decided to participate in the trials and the selection team selected me to be part of the camp.”

“We had a two-month camp and then we had the final trials seven days before the tournament. I made it to the final team. Because no one had complete knowledge of footy, me and my friend, Abiha, would usually watch YouTube videos, learn the rules and then teach the rest of the girls.”

“At the beginning I did not like footy much but after our first match, when we learned more about the game and the rules. I started liking it.”

“It is funny that I say this because I am so little but I love how aggressive the game is. Also, the game is so fast that there is no time to take a break.”

“I think we had a lot of fun playing because we had such amazing coaches - Michael Gallus, Wassim Rafihi and our management there was also very supportive.”

“I think the highlight was the first goal we scored in our final match against the European Crusaders.”

Footy for women is growing worldwide - and especially in Pakistan. It would be interesting to see if Karishma was proud of the roles she played within that growth.

“Until 2017, no-one knew about AFL [in Pakistan] but now we see tournaments being organised across Pakistan, all thanks to the president of AFL Pakistan, Mr Sardar Tariq.”

Whilst her humble nature deflects credit to those who made the big decisions and created the mechanisms for success, Karishma and her team mates were also vitally important to that success and that history.

One of Karishma’s clear messages is having a passion or a belief and chasing it - be strong and determined. It is an extremely important message, especially for young women and girls across the world.

“That has been me since the age of nine. I remember annoying boys in primary school. They would hate it and laugh at me when I would forcefully go into the ground and start playing football. Then I went onto playing football nationally and internationally regardless of receiving threats and being harassed by men on social media.”

“I never believe in solo success, so I started the Chitral Women’s Sports Club to give opportunities to other young girls in my hometown. I believe they are going to be much better athletes and footballers than I am, but are just lacking opportunities.”

“In 2016 I saw a post on Facebook saying I was the first girl from my hometown to play football. Many of the conservative people tried their level best to stop me but could not. Today I have a team of 100 girls who play football.”

In recent times Karishma has met famous but influential people, walked catwalks in Milan, travelled as an envoy to China and the USA. Her key messages for people she meets are that all people can chase the same or their own successes, especially young women.

“Self-belief is so important. Usually the younger generation is always busy judging themselves and their abilities. When I shared the idea of Chitral Women’s Sports Club with different people, most of them would laugh at me. People told me I am digging my own grave because it was not acceptable for girls in my hometown to play football. Not a single person or organisation was ready to sponsor my event. I was upset, I was angry but I did not give up.”

“After five months of trying I finally approached a friend of mine in America, Amirali, who then helped me organise the first ever football camp and tournament for girls in Chitral.”

“I also have always wanted to empower the women in my area. Usually women never have a say in anything, even in their own life and I always think the biggest reason is because they do not make a financial contribution in the family. This led to the idea of me starting the Chitral Women’s Handicraft centre.”

“I told my father that I have no idea how I am going to go about it but I just wanted to do this for the women. My father helped me and with just three sewing machines and renting a room, I managed to start the handicraft centre.”

“I believe you need to have the right intention and take a step. Also, never give up and you will see amazing things happening.”

Karishma and the other women who came to Melbourne in 2017 for the IC17 left an indelible mark of followers of football, and women alike. Since they were here we have read of the incredible work done by Saliha Baig Jaturi (See Inspirational Woman Gaining Accolades and Inspirational From The Pakistan-China Border. Other women from that tour went home to Pakistan and did amazing, unreported, things in their own hometowns. However, it appears that for all of their progress since 2017 in so many ways, they want to come back.

“I would definitely want to be part of the next AFL women’s team from Pakistan to play the AFL International Cup. I compare myself to the eight year old me who lived in a small village with no telephone, no internet and without having any knowledge of the outside world. All I knew was that I wanted to change things.”

“Today many men in my area consider me a leader which is very rare for people in my area.  Many of the men who were against me once are now proud of me.”

I believe one person can change the world and that you are never too small to make a difference.

This is a wonderful message, not just for women but for all of humanity.

It will be a great thing for the game, and for anyone present, to see Karishma and the other Pakistan Shaheens girls run around the ovals of Maroochydore next year when they return.

I already have my tickets. 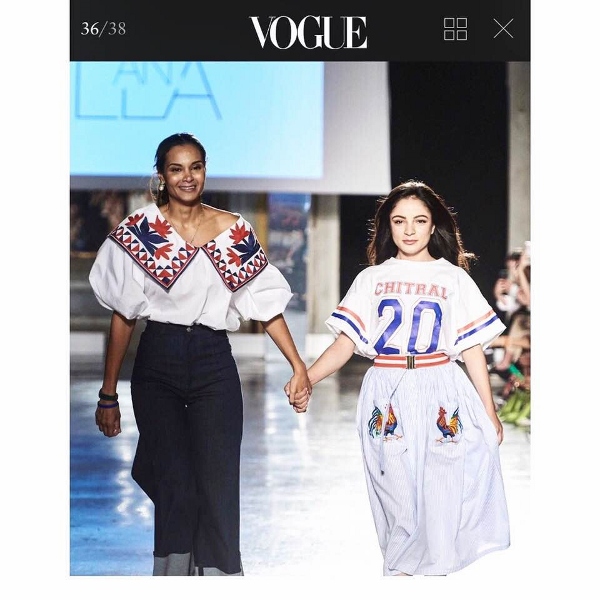 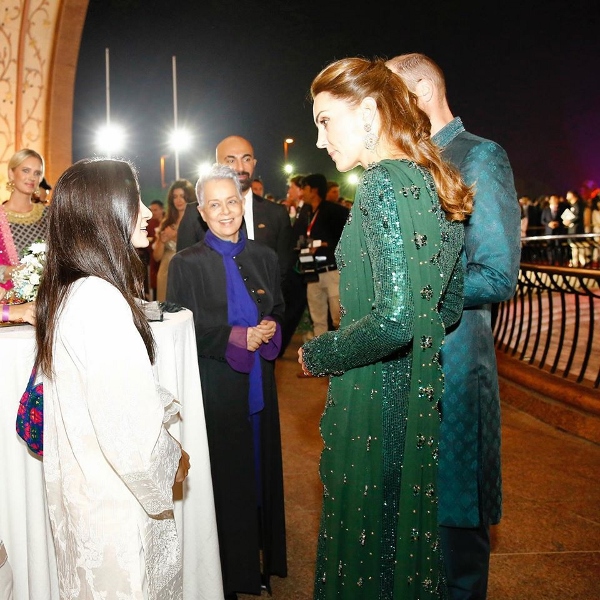 World Footy News - Karishma Inspiring Women Through Footy And So Much More
https://worldfootynews.com/article.php/20191218160831238