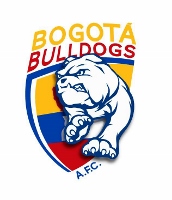 Ahead of the new season for the Colombian Australian Football League (CAFL), the Bogotá Bulldogs have unveiled a new website to widen their distribution of information about the club. It marks the next step in an astonishing development of the game in Colombia, driven by the Bogotá Bulldogs.

The history of the club on one of the pages paints a detailed picture of how far the club has come.

The Bogotá Bulldogs’ slogan is “From a Kick to a Club” - what started as a kick in the park amongst mates in 2015 has grown into a true footy club, nestled 2800 metres closer to the stars. Everyone is welcome and wanted with the doggies. We are building a community open to any and all skill levels and experiences - for anyone in Bogotá who is looking for a sporting Saturday afternoon.

The club formed and started running kicking and training sessions for Colombians, Australians, and other expats in response to a challenge from the Santiago Saints (Chile’s national team) - to play an international AFL match in 2016.

The Bulldogs won that first “Andes Cup” and hasn’t looked back. We elected a committee, started regular training sessions and prepared to retain the Andes Cup in 2017 in an away match against Chile.

Since then the club has affiliated with the Fundacion Buen Punto in order to run an AFL training program based on the “Football for Peace” methodology for Colombian children in state care (we call them “Kanguritos” or “Little Kangaroos”) for this we received a grant from the Australian Government’s Direct Aid program. We also started a three team domestic league based in Bogotá which had its inaugural Grand Final in June 2018.

In 2019 we began a training a programme for women and girls that has seen us launch the first women’s team on the continent and now has 22 Colombians involved. The “Wujeres” took on a composite US/EU team in May 2019 and won their inaugural international match.

If you grew up footy-mad, fell in love with the sport recently, or have never heard of it before come along learn something new and make some mates along the way. Woof woof!

It is less than five years since the first seeds were planted to grow the game in Colombia. In that time, a healthy international club and league have grown as well as three highly competitive Bogotá -based clubs. Without necessarily planning for it, the work of the Bulldogs and the wider CAFL has become a blueprint for growth that other new nations, clubs or leagues can follow.

To visit the website and explore the club across many contexts, go to the following link: https://www.bogotabulldogs.com/[*1]