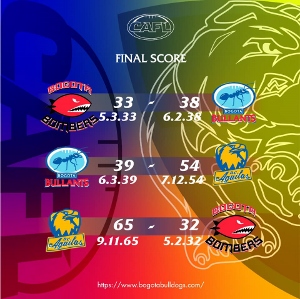 The DC Aguilas have started their season in style in the third season of the Colombia AFL competition. On the first day of the new season, the Aguilas won both of their games against the Bogota Bullants and the Bogota Bombers. Following is the report from the Bogota Bulldogs on the opening round.

After a solid pre-season build up, with 2 full months of Saturday afternoon sessions under the watchful eye of footy department head Jimbob "Hamez" Karantzoulis, it was time for CAFL match day number one for 2020.

Bulldogs stalwart and former CAFL president Paddy Smallwood came up with an innovative new format of three 9-a-side games in the one afternoon in order to try and kill off all of the fossils still hanging around the club. It almost succeeded with Deano Wiltshire being the only pensioner to take the field on Saturday the 14th of March.
Game one between the Blue Studies International - Colombia Bombers and the Gourmet Burger Bar Bogota D.C. Aguilas kicked off at a frenetic pace with some sloppy play but after 5 minutes, Aguilas skipper and midfield gun Oscar Marin opened the scoring with a set shot from 25 metres, setting the tone for a day to remember from the dual Geoff Ryan medalist. A quick response from old man river Dean Wiltshire at the other end evened things up at the 8 minute mark of the term with a snap that reminded us all of the heady days when Deano tied for the Collingwood club best and fairest with Syd Coventry in 1927.

It looked to be shaping up as a tight CAFL classic but that was not to be, with Marin creaming the opposition in the guts. Former Bomber and forward pocket speedster Jonothan Cruz was getting fed non-stop laces out perfection from Marin and capitalized with 2 first half goals, Juan David Chia also slotting home a major for the Aguilas and after a quiet quarter, Bombers forward pocket Tristan Quigley picked up his first goal for the Bombers. Barnstorming Bombers midfielder Santiago Espinosa had a forgettable day injuring his achilles half way through the first stanza and this left a gaping hole for the Bombers middle of the ground.

The valiant efforts of Fernando Leon in the backline put pressure on the Aguilas leading to some waywood shots on goal and the Bombers got a late consolation after some more cunning from the wily veteran Wiltshire, keeping his team in touch with the rampaging Aguilas. The Bombers 3.2.19 trailing the Aguilas 4.4.28 at the long break.

The second half started evenly Jonothan Cruz showing the Bombers backline a clean pair of heels and finishing confidently from close range. Burly Bombers midfielder Sergio Torres roosted home a set shot from 30 metres, the Aguilas lead was cut to just 10 points and it was game on. Aguilas newcomer Freddy Mono made a forward surge and finished with major followed soon after by another to Cruz who picked up 3 goals in the second half for a total of 5 in the game.

With Marin running amok in the middle, Bombers back pocket Yohana Rivera stemmed the tide with some skillful defending and actually stood up speedster Cruz in sensational play. Journeyman Aguilas defender Alex Raf shut down elderly first half star Wiltshire, as he was mauled by the big backman, showing off his usual impressive closing speed. Two quality late goals from Sergio Torres flattered the Bombers with a final score of 6.2.38 to the Aguilas slightly waywood but dominant 8.11.65.

After a strong showing against the Bombers, many spectators were asking themselves could the Aguilas back up against a fresh, fit looking Speak to me Language Services Bullants lineup. The Aguilas started with Oscar Marin controlling the midfield once again, showing no sign of slowing down after picking up 40 touches in the first game. The Aguilas struggled to convert possession into points early and ageing goalsneak Dean Wiltshire opening his account against the run of play with a clever snap after missing what he should have slotted from a set shot. This shocked the Aguilas into action, down after dominating the early possession, Marin and Jonothann Cruz both picked up majors in quick succession.

Not discouraged Fernando Leon finished a handy Bullants passage and Wiltshire broke some soft tackles from the Aguila defence and bought the clash back within a point. Aguilas hitman John Escobar, sporting a classic Tom Alvin haircut from the 80's started asserting his presence off halfback, monstering some of the Bullants midfielders and half forwards. Lanky Bullants ruckman Andres Martinez worked his way into the match dominating the ruck contests and picking up some crucial touches to even up midfield possession. When the dust settled the Bullants trailed at the main break by a solitary point 4.1.25 to 3.8.26, with inaccurate finishing by the Aguilas keeping the game tight.

After halftime it was again Marin dominating proceedings and Freddy Mono with an impressive turn of speed capitalizing on some disorganized defense and putting away two early goals followed up by a another major from Marin jumping the Bullants early in the half. Aguilas ruckman Juan David Chia lost a thumbnail, leaving the field clearly frustrated and it looked like the Bullants would stay in touch. Fernando Leon pushed forward and delivered another clinical finish, picking up his third major and keeping the contest well and truly alive. Yudy Benavides provided run off half back along with the tenacious Mexican defender Miguel Pacheco for the Bullants however Erika Poveda played another solid game in defense combining with Alex Raf to dry up the Bullants avenues to goal. Another classy effort from Aguilas star Johnathan Cruz late in the half sealed the deal, the Aguilas running out victors, despite poor finishing, 7.12.54 to the Bullants 6.3.39.

The third game of the afternoon was the battle of the walking wounded, Bombers forward Tristan Quigley with an invisible rib injury and severe salsa-dancing related neck strain and Bullants stalwart Dean Wiltshire suffering from old age in the form of various aches and pains.
Both teams limped on to the field with some severe storm clouds gathering, the atmosphere was dour from the outset. Quigley quickly put his injury concerns aside, slotting the first two goals and stunning a hapless Bullants defence as well as the remaining spectators. Bullants skipper York Michael Peñalosa, who had a quiet day until now, bobbed up combining with Jonothan Cruz to slot his first score of the day. The Bombers looked the goods heading to half time with Alex Raf ruining a perfectly good finish by doing his wanky Duursma bow and arrow post goal celebration. Right on the eve of half time, the Bullants moved an indefatigable Oscar Marin into the midfield and momentum quickly swung back in favour of the Bullants, with a solo run and goal, followed by a Wiltshire special, a classic move he learned from Harry Collier in the 1930 VFL premiership, put the Bullants right back into the game, the Bombers up by a point a the main break, 3.3.21 to the Bullants 3.2.20

The heavens opened in the second half and with the game in the balance the tireless Marin began to assert his dominance yet again, Wiltshire capitalizing with goals in succession and really starting to dominate the forward line in the absence of Alex Raf who had pushed forward. Peñalosa swooped on a loose ball and rammed home what looked to be a match winner. A valiant effort by Fernando Leon picking up a mountain of possession in the centre of the ground was not converted in the slippery conditions, as Bogota put on a show with a proper downpour. Quigley picked up a late goal and Sergio Torres, who has shown massive improvements from last season, also finished with a major bringing the Bombers to within a kick but it wasn't enough as the siren loomed. Final score Bombers 5.3.33 to the Bullants 6.2.38.