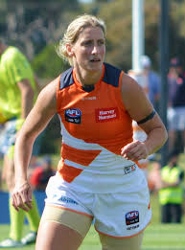 Peter Leahy, a leading Gaelic Football manager with the Mayo inter-county women’s team has drawn a line in the stand regarding players having to choose between their Gaelic Football careers in Ireland or an AFLW career in Australia.

Earlier this year, Emma Duffy from The 42 website wrote an article which highlighted this same battle between codes (see Choosing Isn’t Fair – AFLW v Ladies Football) and there is no end in sight. The following article by Marc McGowan at the www.afl.com.au[*1] website looks again at this issue, four months on. The stalemate continues, with Peter Leahy not backing down on the issue and AFLW clubs, along with CrossCoders still pursuing more women to come and play in Australia.

ONE OF the leading managers in Gaelic women's football is threatening not to select Irish players if they choose to pursue an AFLW career.

Peter Leahy is in charge of Mayo's inter-county women's team, which produced five of the 18 Irish footballers who were on AFLW lists this past season.

One of those five, Irish champion and Greater Western Sydney's Cora Staunton, previously severed ties with the club, along with 11 other players, after a disagreement with Leahy on a separate issue.

Another of Mayo's stars, Rachel Kearns, is also on the AFLW radar and showing interest in coming to Australia as soon as next year.

Hill's spoken with the three AFLW clubs concerned about the matter.

"My first reaction was extreme disappointment that someone in that position would actually give a comment like that to the media without having the conversation in private," Hill told womens.afl.

"There's been some (dialogue) but that conversation should have stayed private."

There is usually no clash of games between the codes, with the Ladies' Gaelic Football Association season running from July to September, although it is postponed indefinitely because of the COVID-19 outbreak.

"We've made a decision that anyone who wants to go to Australia, we'd have to omit from the panel (squad) and carry on regardless, because of what's best for Mayo," Leahy told Midwest Sport radio in Ireland.

"There's no other sport I know of where you can play two in the same season. The demands of inter-county football are so high now. You can't even be a dual player … it's just an impossibility.

"We lost four top-quality players last year to the (AFLW) – that's way too many for any team.

"The reality of it is if we're serious and we really want to have a go, we have to have players at home."

Leahy said this was "the hardest decision" he has had to make but that he was prioritising Mayo.

"I always believe you should take the opportunities in front of you but there is a time when you have to put your county first, and … we're not a county that is just battling to survive," he said.

"This is an amateur sport, so it's a personal decision to make.

Leahy's challenge to the players' loyalty was what riled Melbourne-based Hill most.

"I understand what he's saying but to question the girls' loyalty to Mayo football in a public forum is pretty disgusting," Hill said.

"This is long hours, this is driving across the country late at night, this is giving up on social engagement, this is not having summer holidays, this is being thrown off pitches when you're at the elite level of women's football for underage boys' teams, and never complaining or commenting on that.

"Then to have your loyalty questioned to go and live a dream abroad of playing professional sport and being treated like a professional athlete – that's what really rubs us up the wrong way."

The only male Mayo product to play an AFL game is Pearce Hanley, who's appeared 161 times for Brisbane and Gold Coast.