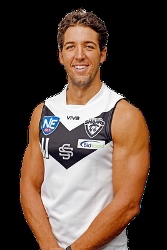 The Australian Football world on both sides of the Pacific Ocean is in mourning at the news that former New York Magpie, Alex Aurrichio, has been killed in a car accident near Darwin. Aurrichio stands as one of the earlier pioneers of the wave of Americans coming to Australia over the past decade to pursue Aussie Rules careers.

The 198cm giant ruckman was involved in a cycling collision with a car neat Howard Springs, to the east of Darwin. The thirty-year old left his native New York in 2015 to chase his dream of making it in the AFL.

Lured to the game whilst playing for the New York Magpies, Aurrichio decided to throw the dice and try his luck in Australia. The Carlton Football Club had been impressed enough to sign the athletic and huge framed ruckman – the club at the time stating that they saw no novelty value in signing the American as his body could already stand up to the biggest bodies in the VFL/AFL system. He worked tirelessly on his skills to improve his chances.

Spending his initial years with Carlton’s VFL affiliate, the Northern Blues, Aurrichio went on to become a footy journeyman, seeking every possibility to climb the footy ladder and constantly become a better player.

His journey saw him spend time beyond Victoria. He also played for SANFL club South Adelaide and had just completed a second season with NTFL club Waratah in Darwin. As they play through the summer months down south, he took on an opportunity to work under former Port Adelaide coach, Matthew Primus with NEAFL club the Southport Sharks in Queensland. That opportunity was curtailed by the postponement of the 2020 season, though he would have been set to line up again for the Sharks whenever the NEAFL recommenced.

Aurrichio’s passing will be sadly felt back home in the USA and also across many clubs, states and leagues in Australia. As a pioneer of the game for Americans pursuing Australian football, his loss will be profound.

World Footy News passes on their condolences to Alex Aurrichio’s family at this very upsetting time.