Round 5 AFLW Wrap Up: 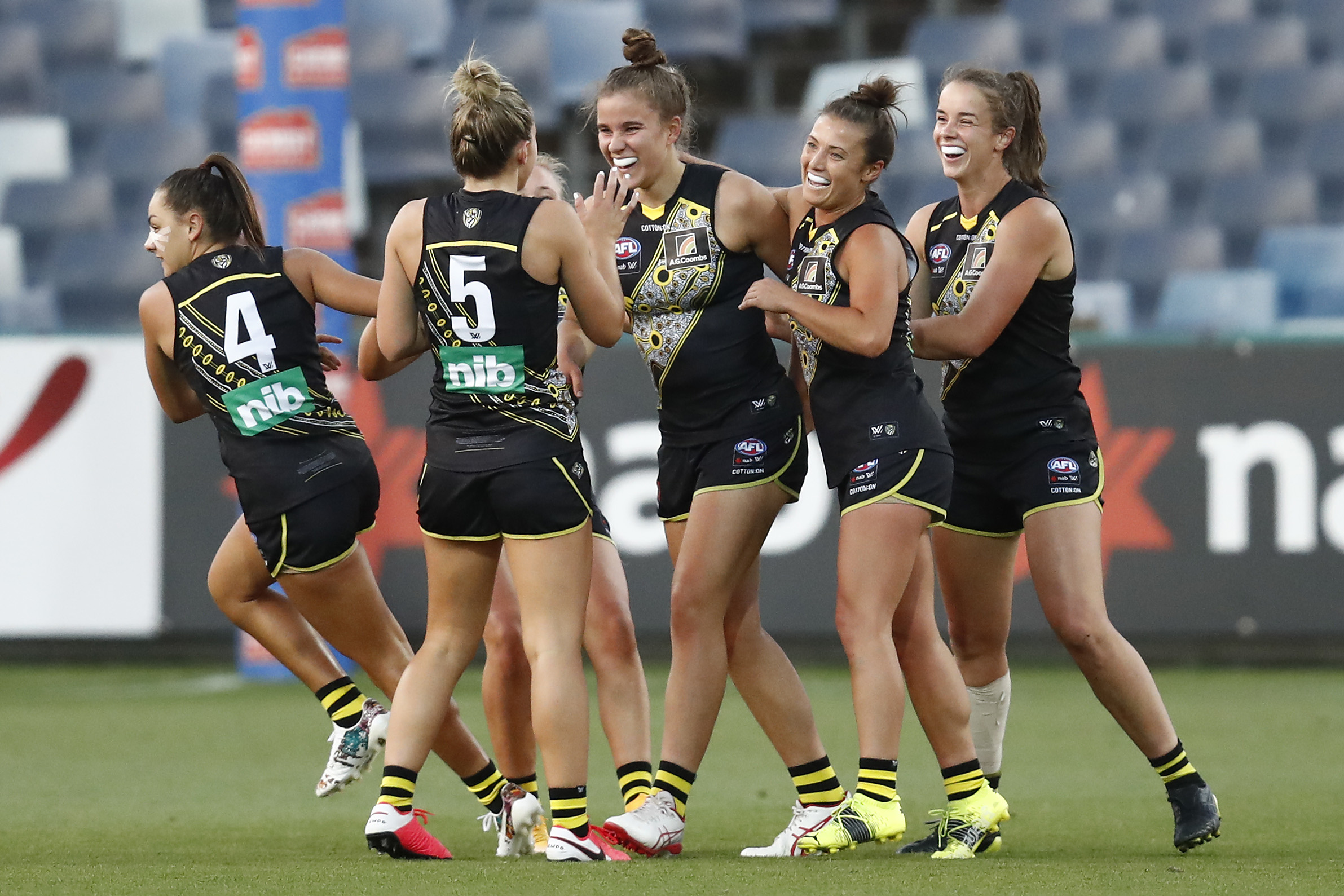 Round five was the first ever Indigenous round in the AFLW and it did not disappoint.

Collingwood are the only undefeated side and continued to show why they are a real premiership threat this season.

The match of the round was the last game between two winless sides, the West Coast Eagles and the Gold Coast Suns with it going down to the wire.

Richmond finally get their first ever win its AFLW history after crushing Geelong by 47-points at GMHBA Stadium on Friday night.

It was an outstanding victory from the Tigers led by Monique Conti and Katie Brennan. ﻿

The Tigers came out all guns blazing in the first half kicking six goals and keeping the Cats scoreless.

It was a powerful performance from the Tigers and they continued to dominate the match with three goals in the second half.

Within the opening three minutes of the third term, Rochelle Cranston broke through with the Cats first goal of the match.

For the first time this season, the Tigers played four quarters of football.

It was absolute scenes at the end of the match from the Tigers, they were filled with pure joy and relief.

The Cats remain winless in the 2021 season.

Conti was sensational all match and finished with 26 disposals, while skipper Katie Brennan was on fire up forward with three goals from 17 disposals.

Richmond will have to be at their absolute best next round, as they will come up against North Melbourne at Swinburne Centre on Friday night and Geelong will look to finally get on the winners list in 2021 when they travel to Ikon Park on Sunday afternoon to play Carlton.

Huntington and Toogood combined with six goals, kicking three goals each that powered the 7.5 (47) to 3.4 (22) win at VU Whitten Oval.

Huntington scored three goals for the first time ever in her AFLW career.

The win is the fourth in a row for the Daughters of the West, they are staking their claim as a premiership favourite.

The Giants matched it with the Dogs during a start tense to the match, as they controlled the territory battle.

After a strong start, the Dogs began to get on top in the contest with their counter attack to level up the scores at quarter time.

But, after quarter time it was all the Dogs with Huntington and Toogood putting on a masterclass up forward, scoring five goals together at half time.

The Giants could not keep up with the slick attack work of the Dogs in the opening half.

In the second half, the scoring from the Dogs slowed down with them only kicking two goals and in the final quarter both teams were kept goalless.

Western Bulldogs will look to be the first team this season to defeat ladder leaders Collingwood in 2021, when they face them at Victoria Park on Sunday afternoon, while the GWS Giants will host a heavyweight of the competition in the Brisbane Lions at Manuka Oval on Saturday afternoon.

Brisbane Lions handed the Fremantle Dockers their first defeat of the season by 11-points on Saturday afternoon.

It was an absolute nail-biter of a match at Fremantle Oval and the Lions have put a halt to the Dockers' winning streak at 11.

The Lions were huge defensively keeping the Dockers to a goal, with the Dockers only goal coming late in the final term via Roxanne Roux.

It is the first time since the GWS Giants in round five, 2018 that a visiting side has won at Fremantle Oval.

Ally Anderson starred for the Lions with 16 disposals, nine tackles and a goal, while Emily Bates accumulated 26 disposals (71 percent efficency).

For the Dockers, the ever reliable Kiara Bowers contributed 24 disposals, 20 kicks and eight tackles.

In round six, Fremantle Dockers will play in the Western Australian Derby against the West Coast Eagles at Optus Stadium on Sunday afternoon and the Brisbane Lions will play the GWS Giants at Manuka Oval on Saturday afternoon.

North Melbourne bounced back into premiership contention after two straight losses, cruising past Carlton in the second half to triumph by their 22 points at the University of Tasmania Stadium on Saturday night.

The Blues held a slight advantage of four points at the main break, but North stormed home with five final quarter goals in the 9.5 (59) to 6.1 (37) victory.

With the loss, the Blues are struggling to make the finals as they only have two wins and three losses with four rounds left.

No Maddy Prespakis for the Blues due to a one-match suspension and the Blues struggled without the AFLW best and fairest winner with North dominating the clearances 27 to 18.

With Prespakis not playing, Jess Hosking was used in the middle more and she finished with 14 disposals and four tackles.

It was a crucial clash for both sides, as both sides have played below their best this season.

North came out all guns blazing in the match, determined to get back on the winners list after two losses in a row especially last weeks demoralising loss where they were kept to eight behinds for the entire match.

It was uncharacteristic for North, a side that scores heavily and they came out strong against the Blues scoring nine goals.

North sent a message to the rest of the competition that they are still a force to be reckon with in 2021.

Next round, North Melbourne will come up against Richmond at Swinburne Centre on Friday night, while Carlton will look to secure their third win of the season against winless Geelong at Ikon Park on Sunday afternoon.

A comprehensive 53-point win from the Adelaide Crows over St Kilda at Norwood Oval on Sunday.

It was remarkable from the Crows, as they had 47 inside 50s to the Saints eight inside 50s.

A highlight from the match came when Crows' Justine Mules put through her first ever AFLW goal and her celebration was amazing.

Erin Phillips was the best in the match with 21 disposals and a goal and Ebony Marinoff accumulated 23 disposals, six clearances and nine tackles.

The Crows could not be stopped all over the ground and they showed why they are still one of the premier teams of the competition keeping the Saints to their lowest score in their AFLW history in fine conditions.

Saint young gun Georgia Patrikios continued to be the shining light along with Tilly Lucas-Rodd with 24 disposals each.

The Saints had more of the ball, but could not capitalise and struggled to get any momentum over a overpowering Crows.

In round six, the Crows will look to notch three wins in a row when they host the winless Gold Coast Suns at Norwood Oval on Saturday afternoon and St Kilda will travel to Casey Fields to play Melbourne on Saturday night.

Collingwood are top of the ladder, as they destroy Melbourne by 35-points at Victoria Park on Sunday.

After the first five rounds, the Pies have staked their claim as the team to beat this AFLW season.

Young star forward Chloe Molloy continued to perform up forward with three goals and the Dees found it hard to stop her dominance on the game steering the Pies to their fifth victory in a row in the 7.7 (49) to 1.8 (14) at Victoria Park.

It is the Pies' best start ever to an AFLW season.

The Dees were their own worst enemy with inaccurate kicking, as they scored eight behinds and from the last two rounds they have kicked two goals and 20 behinds.

Next round, Melbourne will host St Kilda at Casey Fields on Saturday night, while Collingwood will try to extend their winning streak when they host the Western Bulldogs at Victoria Park on Sunday afternoon.