Third time lucky, as the Lions ROAR to their first AFLW flag 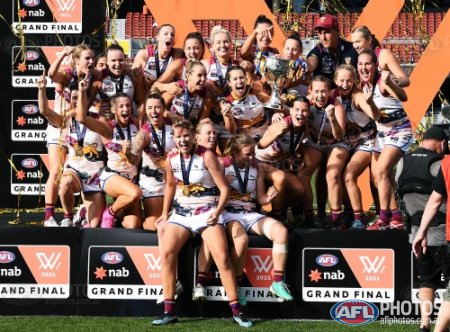 Third time lucky for the Lions.

They broke the Adelaide Crows hearts, the same way the Crows did to them way back in 2017.

Brisbane Lions have secured their maiden AFLW premiership, after they went down in their previous two grand final appearances to Adelaide and the Western Bulldogs, defeating the Crows by 18-points at Adelaide Oval.

For most of the match, the Crows were the team with greater possession of the ball, but the Lions stood tough and strong down back each time the Crows sent the ball forward in attack.

Courtney Hodder and Jess Wuetschner made their presence felt midway through the match kicking two goals each.

Lauren Arnell and Isabel Dawes played well in their last AFLW match booting through one goal apiece to give the Lions a 22-point advantage at three quarter time.

It was a brutal third term with captains from both teams going down injured (Emma Zielke, Lions with a hamstring injury and Ange Foley, Crows with a knee injury.

After a pump up three quarter time speech from captain Chelsea Randall who missed the match due to concussion, the home side came out and fired the opening major of the last quarter but that was all she wrote for the Crows with the Lions' defence proving too strong.

The Lions defence was sensational only allowing three goals to be scored considering they conceded 44 inside 50s (sixth most in an AFLW match ever).

In a disappointing day for the Crows, Ebony Marinoff (17 disposals, 15 kicks and six tackles) gave it her all like she has all season and Stevie-Lee Thompson was impressive up forward with 18 disposals (63 percent efficiency), 12 kicks and a goal.

Erin Phillips was kept quiet for a half, which was unlike her as she has been judged best on ground twice in previous AFLW Grand Finals.

It was simply not the Crows day, after they were the best team all season but it was one sweet day and revenge for the Lions, as they were finally able to even the ledger with the Crows in AFLW Grand Finals.

Wow, what a way to end the 2021 AFLW season with two of the best teams since the AFLW began to play off in the big dance.