Game Changer - A Swan In Iowa 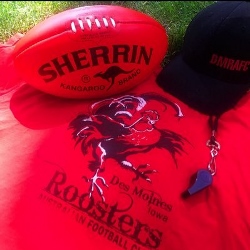 Donnie Hess is already well known to American audiences for AFL social media outlets. His YouTube clips, podcasts, tweets and myriad other promotions of our game have helped enormously to propel the game of Australian football further and wider across the USA.

In the second of a series of interviews with Australian football lovers across the USA, I threw some questions to Donnie about his own journey to the game, where the game sits now in his country and some ideas about the future. We haven’t spoken heavily about his beloved Sydney Swans, but rest assured, he will talk about them until he is blue in the face if you get him started.

Can you tell me a little about your own background - the who, when and where kind of answers that you are happy to share.

I was born and raised in Des Moines, Iowa. I grew up playing and watching all kinds of sports. I played baseball, basketball, soccer, and football through my youth. As I got older, I fell in love with coaching and have coached many sports, including footy present day.

My own love of the game has seen me want to promote it across the world, so I am excited when I see any other interest growing. What was it that first attracted you to the game, and what is it about the game that has seen your interest grow?

So many things attracted me to the game. The uniqueness, the athleticism, and the non-stop action make the game one of the most fascinating games in the world. Over the years, I joined a local club, the Des Moines Roosters, and am now the Head Coach and Vice President of the club.

How would you rate your interest in the gameω Cursory, Interested, Fanatical?

Easily, my interest in the game is fanatical; die hard footy head! I live and breathe the game, not only during the season, but off, as well. I currently do a podcast on both YouTube and podcast platforms.

The podcast is: “4thandlongradio”, which with my involvement, has given me a spin off segment, called, “Donnie’s Disposal”.

This segment began with a series of interview of fellow American AFL fans from all 18 clubs. Currently, I’m doing weekly round reviews of AFLW and am working on doing more interviews with AFL and AFLW writers, broadcasters, and players, as this year goes on.

You are a Sydney Swans supporter, but I sense your love of the game is wider than that. Is that a fair comment?

Yes! I I became a member of the Swans in 2016 and have loved every moment, even when the team has not been as successful. I love the game and hope it will grow here in the US. I have used my podcast and love of the game to try and help spread the game here. I’m also a member of ‘Footy 5000’, which is a cause to get 5000 people playing footy in the US.

Since COVID-19 has so sadly ravaged the world, and particularly the USA, people have tried to find their new normal. Many Americans have fallen in love with our game with the cancellation of your own sporting codes. Do you see that with other people you speak to or relate to? A growing interest in the game.

During the sports shut down, we did have Footy on the TV and saw a ton of engagement and intrigue amongst fellow Americans. Sadly, now that the “main” sports are back, we have not been able to bring in more fans since then. Everyone here is hoping the main channels will continue to show games, (unfortunately they are not right now) that way we can recruit more Americans to play this wonderful sport.

The USAFL has more than 50 clubs (maybe less now if some folded due to COVID) across many states from New York, Boston and Washington on the east coast to Los Angeles and San Francisco over west. Are you surprised and/or delighted about this?

In all, we have 48 total full clubs. Some are more active than others, but in all, we are spread out all over the country. I love that footy is played in almost every part of the States, including Hawaii. The best part is that we have had two new clubs form, even in the Pandemic, which shows the USAFL is only getting stronger!

Women's footy is strong here in Australia with the AFLW and also grassroots footy. However, the USAFL clubs have had strong women's competitions for many years. Is this an exciting factor also for the growth of the game?

Absolutely. Knowing we have a USAFL alumna in Dani Marshall with the Bulldogs, the whole league knows that we can use that to recruit more athletic and dynamic women to the sport. I believe Dani will not be the last USAFL woman who will dawn an AFLW guernsey. That day will be a great one. In fact, here in Des Moines, we have a slowly growing women’s team. We had five women training and hope to increase that number over the next few years.

Is there anything else you would like to add?

I love this sport! I’m doing everything I can to help grow footy here in the states. I also believe more Aussies would love to know that the USAFL would love supporters from down under. In fact, I think all the clubs could use mentorships from coaches and board members from Aussie clubs just to help us get stronger not only on the field but off.

Donnie has given a very strong invitation for Australian-based clubs to consider. By reaching out to clubs across the USA, the cross-pollination of ideas and support can not only help grow the game quicker over in America, but also provide a wonderful social opportunity for Australian clubs. Donnie, and clubs across the USA, would welcome any contact from clubs in Australia or elsewhere in the world – and that could lead anywhere.

Donnie is changing the game in the USA. Not only is he at ground level with his local club, he is also spreading the word at an impressive rate across media. As more people join him, the sky might be the limit for Australian football across the USA.