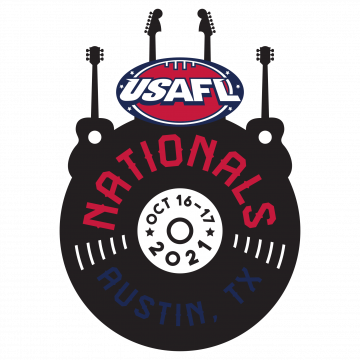 Despite almost two years of footy lost the USAFL showed Aussie rules is alive and well in the USA.  Even without their Canadian neighbours to the north this year due to border restrictions Day 1 showed that despite shutdown the momentum of the game rolls on.

The Austin Crows remain in the box seat after Day 1 of the 2021 USAFL Nationals and didnt miss a beat defeating New York in the morning and Los Angeles at the end of the day to top their Pool at 2-0.  In Pool B the Golden Gate Roos took out San Diego and scraped past Denver to be the other undefeated team.

This sets up the semi-final clashes tomorrow where Austin will play Denver and New York will play Golden Gate and the winners heading on to the crescendo Grand Final match.

The 5 teams of the Womens Division battled hard today with fickle winds making kicking difficult at times.  The San Francisco Iron Maidens kicking 1.9 in their first match of the day can attest to that. That was still enough for them to defeat the Orange County team and more accuratey account for the DC Eagles later in the Day.  The Denver Bulldogs were the other team undefeated today beating the OC Giants and the Texas Heat* (Houston Lonestars in the results).

Tomorrow the Division will conclude with the Texas Heat playing Orange County Giants in a quarter final, with the winner playing the Denver Bulldogs in the 2nd semi final.  The other semi final will be played between the San Francisco Iron Maidens and the DC Eagles.  The winners of those matches will playoff in the 3pm Grand Final.

The the Boston Demons/Maine Cats combo dominated Pool A and look likely to be headed for the Grand Final against the winner of tomorrow monrning's OC Giants vs DC Eagles match.

A number fo Day 2 matches including the finals will be streamed live at the following link.

A number of the teams listed in the tables above are combined teams and the full rosters including the origin teams of players from other clubs can be seen at https://usafl.com/nationals/2021/schedule

All match results about are from the Results section as wwwusafl.com