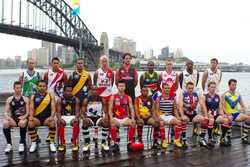 Twenty three teams are set to contest the 2014 International Cup men’s competition. Timor-Leste is the notable team missing for the initial acceptances for the tournament to be held in Melbourne in August.

Others such as Spain, Germany, and Iceland look like missing yet again presumably to keep funds invested in their local development. And hopes that we would see our first South American team at the International Cup have faded as no teams have been nominated. It is not known if they had intended to play in the AFL 9’s section that was initially mooted.

The proposed AFL 9’s section has been scrapped as the overwhelming desire of countries was to field teams in the 18-a-side competition.

The competition will be launched at Federation Square in Melbourne on August 9th and conclude with the Grand Final on the MCG prior to the Round 22 Hawthorn v Geelong night match.

At previous International Cups there have been late withdrawals or additions to the attendees so keep an eye out for the final official list from the AFL in coming weeks.

The countries expected to be attending are as follows:-

2 - Returning to the International Cup after an absence.